Decitabine is a natural 2′-deoxycytidine analog of adenosine, which inhibits the proliferation of tumor cells and prevents the occurrence of drug resistance by inhibiting DNA methyltransferase and reducing DNA methylation. The strongest known specific inhibitor of DNA methylation, belonging to the S phase cell cycle specific drugs, suitable for the treatment of myelodysplastic syndromes (referred to as MDS).

Demethylation drugs can activate tumor suppressor genes and enhance the expression of regulatory genes such as differentiation genes, so it can achieve the purpose of treating MDS. 5-Aza-2′-deoxycytidine (decitabine) is phosphorylated to exert its anti-tumor effect. It acts directly on DNA and inhibits DNA methyltransferase, thereby causing DNA hypomethylation and cell differentiation and death. Decitabine inhibits DNA methylation in vitro without affecting DNA synthesis. It can lead to demethylation of tumor cells, which can restore the normal function of genes, which is very important for controlling cell differentiation and proliferation. However, non-proliferating cells were not sensitive to decitabine.
In 2006, the U.S. Food and Drug Administration approved decitabine for the treatment of MDS. 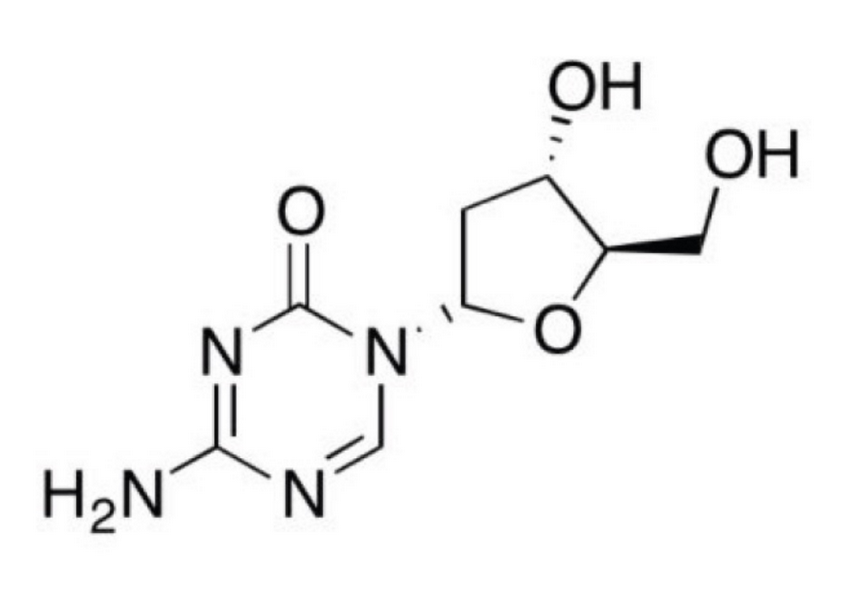 Principle:
In 2004, the U.S. FDA approved the cytosine analog 5-azacytidine (5-aza-cytidin) for the treatment of myelodysplastic syndrome (MDS). Tabine (5-aza-2 deoxycytidine, DAC) came out. DAC is a S-phase specific drug. Compared with 5-azacytidine, DAC has its unique characteristics. By incorporating into DNA, DAC makes it a more effective hypomethylating drug and inhibits DNA methylation transfer. The enzyme, which causes DNA hypomethylation and cell differentiation or apoptosis, at micromolar concentrations, its analogs can cause terminal differentiation and loss of clonogenicity in human leukemia cells.

use:
is an epigenetic modifier that inhibits DNA transmethylase activity, leading to demethylation (hypomethylation) in DNA and activation of genes by remodeling “open” chromatin; when demethylation is associated with When histone acetylation acts in combination, genes can be activated synergistically; 5′-azadeoxycytosine causes DNA demethylation or hemi-demethylation; DNA demethylation can regulate gene expression by “opening” chromatin Detectable structures increase nuclease sensitivity, which remodels chromatin structure, allowing transcription factors to link gene promoter regions, transcription complex assembly, and gene expression.
Decitabine has antitumor activity, and it appears to be a dual mechanism with differing doses. It is cytotoxic at high concentrations and demethylated at low concentrations. Acts on cells in the proliferative phase (S phase).

Treatment of MDS:
MDS is a heterogeneous group of hematopoietic stem cell diseases with variable clinical manifestations. Many patients die from complications of bone marrow failure, such as infection and bleeding or iron overload caused by repeated blood transfusions. It is estimated that about 20% of MDS patients will eventually die. Can be converted to acute myeloid leukemia (AML), and clinical management depends on the patient’s age, MDS subtype, International Prognostic Scoring System (IPSS) score and the patient’s condition (PS). Standard supportive therapy seems to be ineffective in improving disease and prolonging life. The only cure for MDS is allogeneic hematopoietic stem cell transplantation (ALL0-HSCT), but it is not suitable for most elderly patients diagnosed with MDS. For middle- and high-risk patients, the efficacy is low and the recurrence rate is high. Low-dose cytarabine has been engaged in hematological clinical and (Ara-C) phase III trials without improvement in survival, and the 5-year overall survival (OS) rate of MDS is <10% to 60%. It is now believed that abnormal DNA methylation causes many tumor suppressor genes to be silenced in these patients, which is one of the reasons for MDS. Therefore, DNA methyltransferase inhibitors can be used to treat ~tlDAC. DAC has a dual effect of demethylation at low concentrations and cytotoxicity at high concentrations. For this reason, in 1993, Zagonel first reported using DAC l 5 mg/m, 3 times a day, instillation for 4 hours each time, for a total of 3 days, to treat 2 cases of RAEB and 8 cases of RAEB-T, of which 4 cases were treated with DAC 50. mg·m-2·d-1 continuous infusion (CI) for 3 days, the results showed that 50% of the patients had increased peripheral blood platelets, neutrophils and hemoglobin, and improved the relative differentiation index of granulocytes and the ratio of granulocytes in the bone marrow, 40% Complete hematologic remission (CHR) was achieved. Wijermans et al. treated 29 elderly patients with high-risk MDS with DAC (120-225) mg/m total Ci for 72 hours, with a total effective rate of 52%, 8 of which achieved CR and OS was 46 weeks. Some people use DAC 45 mg m d × 3 days, every 6 weeks as a cycle, after 2 courses of CR, and then receive 2 courses of consolidation therapy, the total effective rate is 42%, while the high risk of IPSS is 64%. It was found that there were 31% of the main cytogenetic responders after 3 courses of DAC. Issa et al. treated 50 cases (44 cases of AML/MDS, 5 cases of CML and 1 case of ALL) with DAC 15 mg·m-2 ·d-1, iv>1 hour infusion, 5 days a week, for two consecutive weeks. 65%. However, Kantarjian et al believed that the optimal dose of DAC is 20 mg·m·d- , iv > 1 hour × 5 days, and the treatment is repeated regularly, and the curative effect is better. Due to the heterogeneity of MDS manifestations, patients with intermediate-2 and high-risk IPSS should receive at least 4 courses of treatment, and some may take up to 6 courses of treatment or more. In order to maximize the efficacy of hypomethylating drugs, as much as possible long-term treatment. DAC side effects are mainly bone marrow suppression and expensive.
The treatment of high-risk MDS with decitabine will play an even greater role in the clinical application of hematological malignancies.